IGN posted this video profile of Lobo as background to the character’s inclusion in ‘Injustice : Gods Among Us’.

It’s pretty good, including a whole bunch of really cool signature Biz pieces under a gruff voice-over explaining (mostly) the history of the Main Man.

It credits Giffen and Slifer as the creators, as it should, but despite using a metric shit-ton of Bisley images, it doesnt’ credit Grant or Bisley as reinventing the character. It makes no reference to the fact that Biz had more-or-less carte blanche over the title, amusing himself with sight gags and pretty much just having a great time with it. 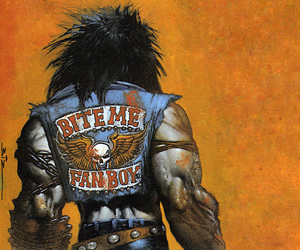 The iconic jacket is there (you know, this one), as are several other images we know and love, but no credit given.