To celebrate 30 years since that dwarf first brought Slaine to us, Pat Mills has written a series of chapters compiled into the Book of Scars. Each chapter has a different artist, drawn from the character’s rich history, and they’re being published each week in 2000AD.

Simon has a unique place in that history. It’s his rendition of the Horned God saga, fully painted and epic in scale, that opened many people’s eyes to the possibilities that comics could present. It established that ABC Warriors was no fluke, and that Bisley could work in colour as well as inks. It made the world sit up and take notice. It probably paid for that bloody great sports car Steve Cook photographed him on…

So it was with some trepidation that I downloaded the digital edition of 2000AD this morning. How would Mills and Bisley deal with the pressure of that legacy? Could they reproduce that magic, was it even appropriate to ask?

The good news is we needn’t have worried.

“Slough Feg and Crom Cruach” (or simply ‘The Horned God’ as it seems to have been retitled,) is a nice, self-contained piece of Slaine lore which leaves the reader satisfied that the years have dulled neither craftsman’s tools. The writing is a delight; Feg continues to spout cod poetry in the old fashion, including gems like “Woe awaits you – And gore will be conspicuous” in proper old Bond-villain gloating. If he’d just cut Slaine’s throat…

There’s a neat line in satire from Ukko too. He gets to see the various editions his saga has been collected into (I’m looking out for the Squirrelskin edition – you hear me, Rebellion?) but Mills also reminds us that all storytelling used to be oral – and you don’t need a fancy hardcover to pass a good tale down to the next generation. 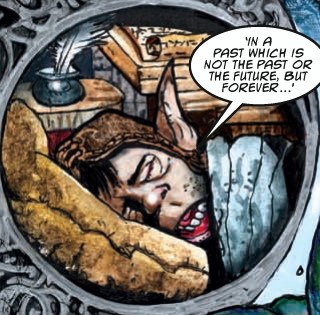 The artwork is… Good. While it doesn’t look to ape the previous outing (I doubt Simon revisits his old work very much,) it’s a lot denser and so feels more like a separate beast than a ‘temporally warped rewriting of history’ the story claims it to be. It’s also a lot coarser, like the old boar whose bristles have grown tough with age, and Simon’s maturity and comfort with the character show. He’s been drawing Slaine at conventions for decades so he can throw him into a fight with a bunch of skullswords without frames getting cluttered or anatomy feeling forced.

Without the multiple issues to really stretch, Simon has ditched the watercolour-over-pencil frames and beats and gone straight for a visceral, rough style which compliments the subject and gives the reader some truly striking images to enjoy. There is the occasional niggle in the detail (some of that celtia in the borders is decidedly dodgy,) but the overall impression is one of an artist who’s having a ton of fun with a character he owns wholeheartedly.

Mills and Bisley’s chapter in the Book of Scars is a nice palette cleanser. It’s a fond drink with an old friend before parting ways again. It’s a fucking great Bisley boar, which is always welcome. It’s that old Bisley kick in the nuts. It’s eight pages which will make you smile and remind you of that time when you read the original, all those years ago.

You can order this issue from 2000AD’s website here, or check your local stockist.