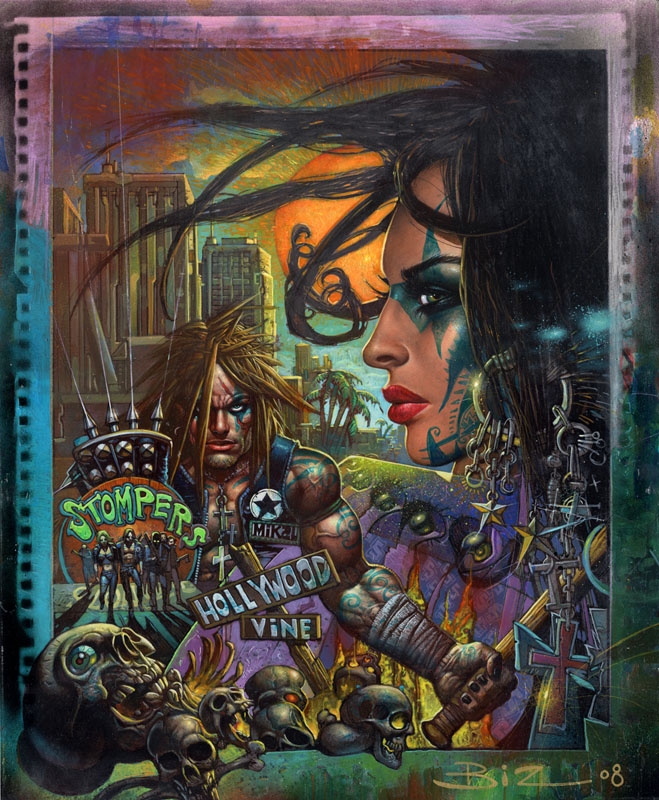 From ComicsAlliance and IDW :

When all hell breaks loose following a massive comet’s near miss, the sprawling metropolis of Los Angeles is irreparably fractured and claimed by legions of brutal gangs. Perpetually turf-thirsty bands of fierce warriors fight day in and day out to claim blood and respect across swaths of scarce land, battered by cosmically twisted disasters. As civilization recedes into uncompromising tribal life, an anomaly surfaces: two rival gang members, Mikal and Angel, find themselves in the throes of a comet-crossed love affair. Threatening to tear their respective clans apart from within, their love becomes the centerpiece to all-out gang war as LOST ANGELES reaches its fever-pitched conclusion over six issues.

“The six issue series, which Eastman will write and draw with plot input from Joe Pearson and cover artist Simon Bisley, sees Los Angeles being “irreparably fractured and claimed by legions of brutal gangs” following a near-miss from a passing comet. While the gangs fight for turf supremacy, two gang members from opposing tribes fall in love, Romeo and Juliet-style.

“I am THRILLED to be back at the creative table with my good friend Simon Bisley, and the very talented Joe Pearson–this is one of the coolest projects I have been involved with in a great many years–and my first solo art project in more than two decades!” Eastman said in an announcement about the series. “I can wait to show the fans what I’m going to do here – my career as a artist is about to go into high gear!”

Lost Angeles — aiming to be the first in an ongoing universe of stories — is due for release later this year from IDW Publishing.”

You can check out our gallery here.